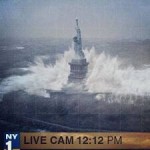 Well Hurricane Sandy left behind countless fallen trees and power lines.  There were stories of tragedy and survival, of people who lost everything when the water rushed in, of buildings that crumbled after being pounded hour after hour by rain and relentless wind, of hospitals that had to be evacuated when the storm knocked out the electricity.  Scores of damages happened to both property and people.

Governor Andrew M. Cuomo has declared a State Disaster Emergency for the entire state of New York. As a result of this declaration, Commissioner Thomas H. Mattox has postponed certain tax filing and payment deadlines for taxpayers who were directly affected by Hurricane Sandy (the storm, not me). The relief provided for in this notice applies to taxpayers directly affected by the storm.

Deadlines have been postponed for the period beginning on October 26, 2012, and ending before November 14, 2012, for:

• filing any returns, including those for personal income tax, corporate taxes, sales tax, highway use tax and any other taxes administered by the Tax Department;

• filing for a credit or refund (Note: This includes the filing of a protective claim for the MCTMT);

• filing for a redetermination of a deficiency, or an application for review of a decision;

• allowing a credit or a refund;

• giving or making a notice or demand for payment of tax;

• collecting tax by levy or otherwise;

• bringing suit by New York State for any tax liability;

• making of elections; and

• any other act required or permitted under the Tax Law or specified in the New York State Tax Regulations.

Interest at the appropriate underpayment rate must be paid on tax payments received after November 14, 2012.

Taxpayers who were directly affected by the storm and are therefore eligible for this relief include:

• victims of the storm who reside in or have a principal place of business in New York State;

• all workers assisting in the relief activities in the designated counties;

• any taxpayer whose records necessary to meet tax filing, payment, or other deadlines are not available due to the storm;

• taxpayers who have difficulty in meeting tax filing, payment, or other deadlines because of disruptions in the transportation and delivery of documents by mail or private delivery services, or due to disruptions in communications services (for example, telephone, facsimile, or electronic mail), resulting from the storm; and

• taxpayers whose tax practitioners were unable to complete work to meet tax filing, payment, and other deadlines on behalf of their clients due to the storm.

Relief from these filing deadlines applies with the following exceptions:

• Remittances of income tax withheld by employers required to be made using Form NYS-1, Return of Tax Withheld, must be made timely.

• Remittances of withholding tax or MCTMT required to be made by employers through the PrompTax system must be made timely.

How to obtain relief

Taxpayers adversely affected by the storm do not need to apply for a waiver or an extension to obtain this relief.

Instructions will be made available on our Web site for taxpayers who e-file or Web file returns.

Paper filers should write Hurricane Sandy on the top center of the front page of any late-filed return, extension, declaration of estimated tax, estimated tax payment voucher, or other document. Attach a brief explanation of the circumstances that adversely affected your ability to meet the tax deadline. Do not write this information on your envelope.

Relief provided – Returns filed or tax payments made in accordance with these rules will not be subject to any late filing, late payment, or underpayment penalties or interest for the period from October 26, 2012, through November 14, 2012.

Abatements of penalties on all other late filings of returns or late payments not made by the date required by law and not covered by this announcement will be handled on a case-by-case basis.

How to obtain forms, instructions, and other information

Taxpayers may obtain forms, instructions, and other information from the Tax Department Web site (www.tax.ny.gov) or by telephone at (518) 457-5431.

General tax information For all callers